The last couple of evenings have had some really good light and clearing skies and after concentrating on photographing spring growth recently, I decided it was time for a change. I must admit that it was a bit of a last minute decision as I had just cleared up after trying to do a surround sound recording of the Elizabeth & Row Harding Nature Reserve in Ilston.

The rain had brought an abrupt end to the recording, but by the time I had packed up, the rain had passed and some great light was available. The sun was low and very strong, which really defined the contours and details on the landscape. The sun was dropping quite fast, so I needed somewhere where I could catch the last few rays. I probably missed the peak moment by the time I had set up at Llanrhidian Marsh, but the light was still quite good and highlighted the headland with Weobley Castle well. Some of the contrast in the scene is lost as the sun was close to being in line with the direction of the lens giving some image flare, but I quite like the effect. The sky behind the castle was bright and not that interesting, so I cropped most of it out as it is distracting in the original image.

The cloud cover was changing rapidly, which produced lots of possible different image styles. The above image was originally made for a black and white conversion, but when I was processing the RAW file it looked better in colour. I’m still undecided about the heavy near black lower border, but I do like this two dimensional style landscape image. I seem to make a few of these when I look back on my other images. 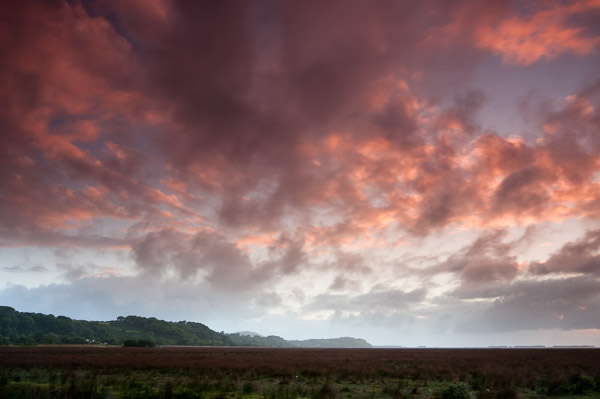 When the sun had dropped below the horizon and with the clouds breaking up, the landscape lit up again.?With the aid of stacked neutral density graduated filters to control the contrast range, I managed to make a few images to emphasise the light on the passing clouds. It always amazes me that just after the sun goes below the horizon there is a short period of a few minutes when the light intensity actually increases. I can’t remember why this happens, but you can see the change in your camera meter. This moment is always a good time to make some pictures as the light is always quite special.

I managed a quick video clip of the passing storm. It seems quite odd having the birds singing in the background as the storm passed, but as I was positioned close to a hedge this is really what I could hear at the time.