Not quite what I had hoped for 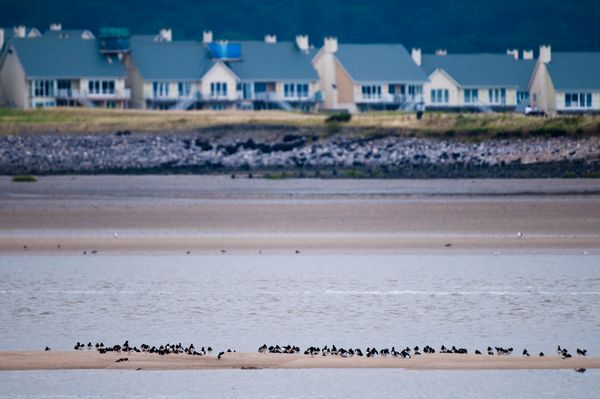 I had a one to one photo tuition session yesterday morning down at Three Cliff Bay which went really well. It was relatively quite there considering it is school holidays. Even the campsite that over looks the bay looked to have some spaces. The lighting was either really flat or too contrasty for good landscape photos, but as I hadn’t been to Three Cliffs for a while I enjoyed walking around again. There was a small flock of Plovers present which reminded me that the lighting would be good for some bird photography up at Salthouse point.

I got to Salthouse point well before the tide came in as it is always best to allow the tide to push the birds closer to you than havingto try and get closer to them yourself. I took the above image while I was waiting for the tide to come in. It shows the new housing development in Machynys, where once there was marsh and grassland that the birds could roost on when the tide was in. I was trying to get an image to represent the pressures on the natural world than man is constantly placing on it. One of the most significant ways man could help nature and ensure a better future for itself would be through population control. This is the least talked about environmental option and is probably the hardest to do, but it would have an impact in all areas that are of concern at the moment in the environment e.g. climate change, water usage, food production, house building etc.

The bird photography didn’t really happen as a fisherman and his young son decided to dig for bait and start fishing in the estuary next to where I was positioned. As a result all the birds settled away from my location. Not quite what I had hoped for, but it prompted me to start looking for alternative images and to work within the limitations of the one lens I had with me at the time.