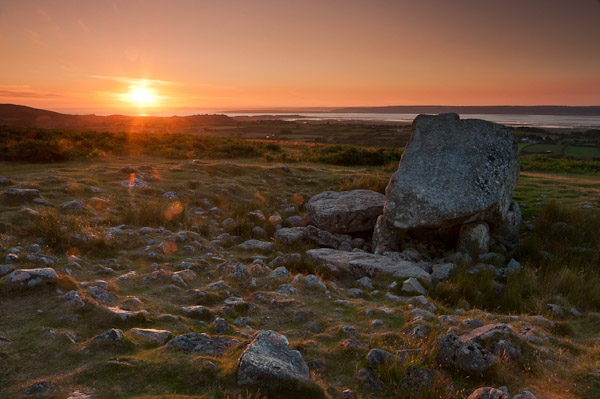 We have been blessed with some great weather recently which I’m sure will come to an end now the schools are breaking up for the summer holidays. The clear skies have lead to some great colours at sunset. I wanted some variation from my previous location of Whiteford National Nature Reserve, so I chose the second highest point in Gower, Cefn Bryn. I hadn’t been to Arthur’s Stone for a while, so I thought it would be worth trying to include this in the sunset as well. My initial idea wasn’t working, so I resorted to a more classical style landscape image. Contrast was proving an issue with the bright light and flare was unavoidable with the sun in the image and a wide angle lens fitted with stacked graduated neutral density filters. Here’s a bit of a curve ball for you – I also used flash. My original idea was to use flash in lighting part of my image, so I had set a flashgun with a wireless remote trigger on a stand. When I switched ideas to the one above it was still useful for me to use the flash, so I left it connected to the camera. Hopefully it is not visible where it was used, but it saved me some time in the computer later. Some people will not like the flare spots in the image. I think? don’t mind it, plus I can’t be bothered to spend ages on the computer getting rid of it! 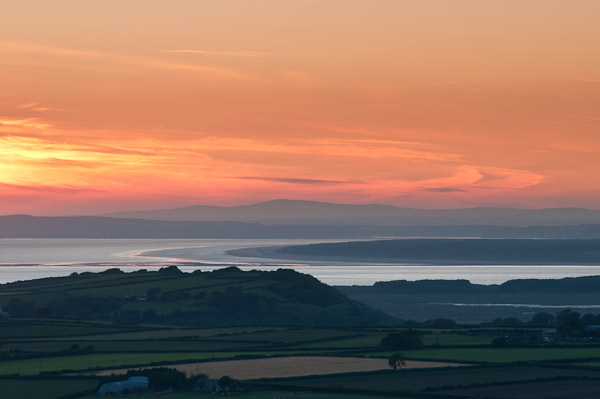 Often photographers leave a location after the sun has crossed the horizon. It is always wise to hang around and make a few images. You will need graduated neutral density filters to get the best image balance, but the light becomes softer and less contrasty, producing a nice quality to the image. The image above shows the sky after the sunset above, notice how there is more cloud detail and more subtle colour differences. It also reminds me that I need to stand on Llanmadoc Hill next time to get a better view over the estuary!