Kittiwake Update from Mumbles Pier plus some video 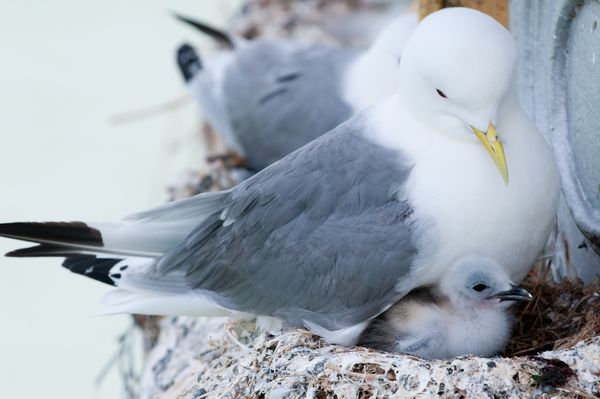 The Kittiwakes are doing well at Mumbles Pier despite the heat. Check out the photos of fellow Gower blogger, Adam Tilt HERE?to see how they coped in the higher temperatures. I revisited?last Sunday as it had become a bit cloudier which helps with the contrast in the images. By the time I got to the pier and with an opening time of 9am, the clouds had cleared and the sun was out. Luckily where some of the birds nest is in the shade so I was able to make some images. I was trying to get some images of the chicks, but as they don’t do too much at the moment, plus a lot of the adults are still brooding them, I had limited success. I tried a few variations, some of which worked, but I also decided to make a quick video for those of you who are not able to get to the pier.

A few comments on the video. The audio makes it sound that it is quite noisy in the colony. It is actually relatively quiet for a gull colony, compared to those I have spent some time around on Skomer & Skokholm Islands off the Pembrokeshire coast. The editing just seemed to make it appear as if birds are calling all the time when they are not usually. For those of you who think they can detect the sound of a pressure washer at some stage, you will be correct. The crew of the RNLI lifeboat, which is stationed off the same pier as the Kittiwakes, were cleaning the lifeboat down while I was trying to make the video. It didn’t seem to matter if I stopped filming and started again later. The pressure washer always seemed to come on when I pressed record. I now appreciate after trying sound recording on my course with Wildeye?last year how difficult it is to get a clean sound recording like we are used to hearing on TV etc.