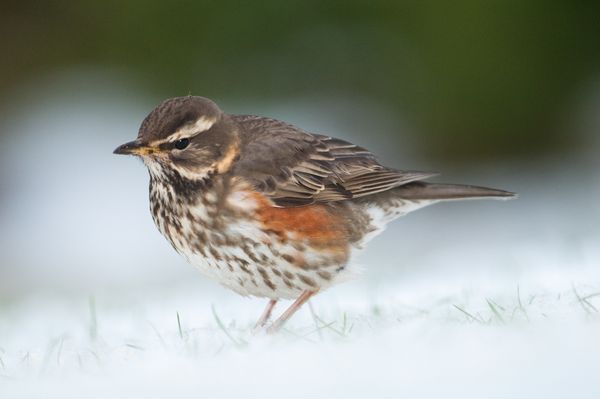 With a new forecast for snow being given, I was better prepared this time round. I set up two hides in the garden as the number of Redwings had increased to about 7 to 10 regular visitors plus the Starlings and Blackbirds were increasing in numbers as well. 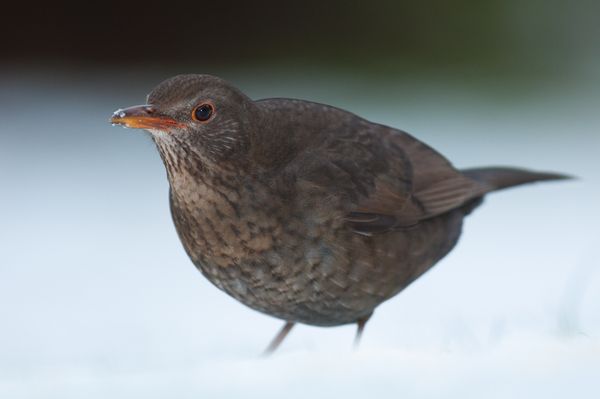 By feeding regularly in front of the hides, the birds very quickly accepted the hides and started coming very close. Once I was inside the hides they occasionally came too close for the lens and with the numbers of birds feeding, it became difficult to isolate individual birds at times. 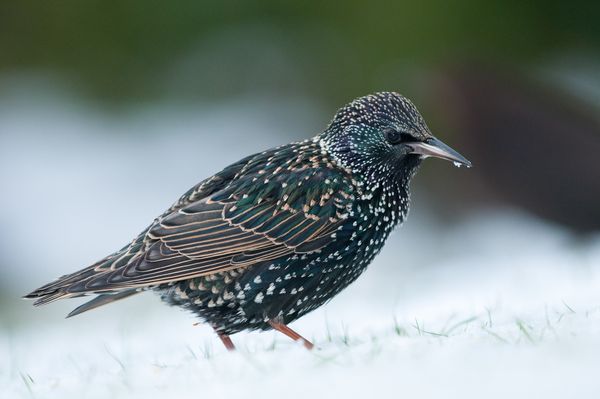 The more eagle eyed amongst you will have noticed the catch light in the birds eyes. Once again due to the dark conditions high ISO’s were needed and to help provide some colour correction and improve colour saturation, I used fill in flash with a flash extender fitted to match the lens coverage. I used a 500mm lens on a beanbag and laid down in my hide I have set up for ground level photography. Normally I would have used my 90 degree angle viewfinder to view through, but I kept fogging it with my breath so I used the normal viewfinder instead. I had to alter the ratio of fill in flash as the birds were coming quite close and as a result I probably didn’t need the flash extender as the birds were within about 5 feet of the lens.

With film my normal fill in flash setting was one and 2/3 of a stop less than the correct exposure, but with the enhanced low light capacity of digital I have found that I have decreased this to 2 and 2/3 of a stop less than the correct exposure. At the old setting the flash looked over done, and due to the close proximity of the birds here, I feel that I maybe should have gone lower to 3 stops or more less than the correct exposure. The flash setting on the camera is always set for Rear Curtain sync to avoid motion blur appearing over the sharp image with slower shutter speeds. With rear curtain sync, if there is any subject movement due to a slow shutter speed, it is overlaid with the sharp image made by the fill in flash. This provides a more acceptable image than having motion blur on top of a sharp flash image made at the start of the exposure with normal curtain sync. When the shutter speed gets too low, especially for the feeding motion of the birds, I had to wait for the bird to pause slightly before making an exposure. The flash was connected to the tripod collar foot with a Wimberely flash bracket, so the flash moved with the lens and was kept off the direct axis of the lens to avoid steel eye which is the bird equivalent of red eye.