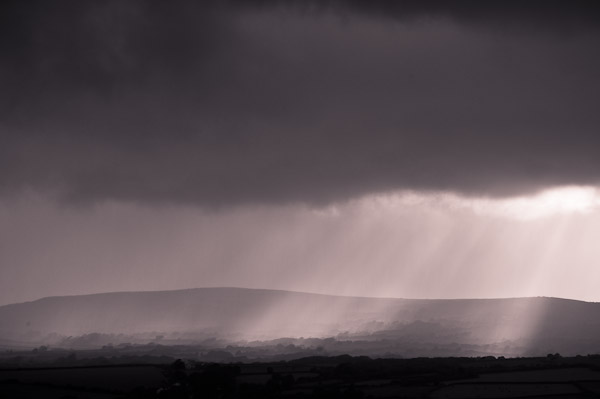 When it is wet, grey and generally dull with a gale blowing, apart from waves and barnacles on rocks it is generally a difficult time to try and make images. I was having one of those days last Wednesday, where it didn’t matter where I went, I just was struggling to find subjects that seemed to work. I eventually ended up at Arthur’s Stone on Cefn Bryn. Due to the rapidly declining weather I was up there on my own, so when a severe rain storm hit and visibility was reduced to 100m at least I didn’t have to fight with anybody to get the only sheltered spot under Arthur’s Stone itself. It doesn’t matter how good your waterproofs are, eventually the rain gets in, so I was glad for some shelter. I’m actually quite surprised that I was wearing my waterproofs. Normally I forget to take any for me and only carry the ones for my camera and bag! 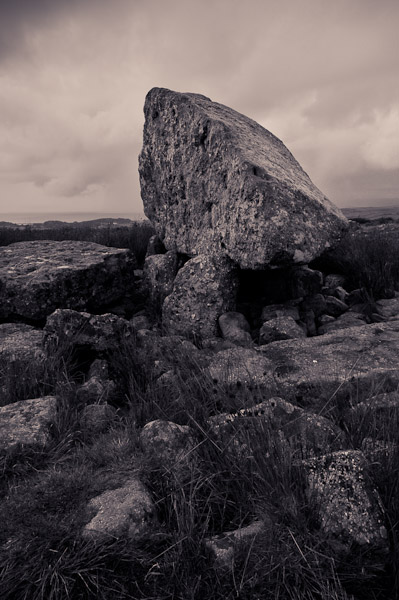 As the rain cleared a few beams of sunlight came through the clouds and spotlighted some of the landscape. Unfortunately none of them hit Arthur’s Stone, which stayed in rather boring dull light. I knew when taking the images that conversion to black and white would have to be done.?The colours were so dull and fairly monochrome anyway, the images wouldn’t work in colour. I like to work with black and white film, plus all the processing and darkroom work. I think that it has a craft feel to it. Unfortunately with my darkroom in boxes at the moment, digital is my only real route to choose from. At least I can now reduce the number of camera bodies that I have to carry. In the days of film I had a couple of bodies loaded with slide and black and white film. This was no problem with the ?interchangeable backs with my medium format system. but with 35mm it was a bit of a pain.