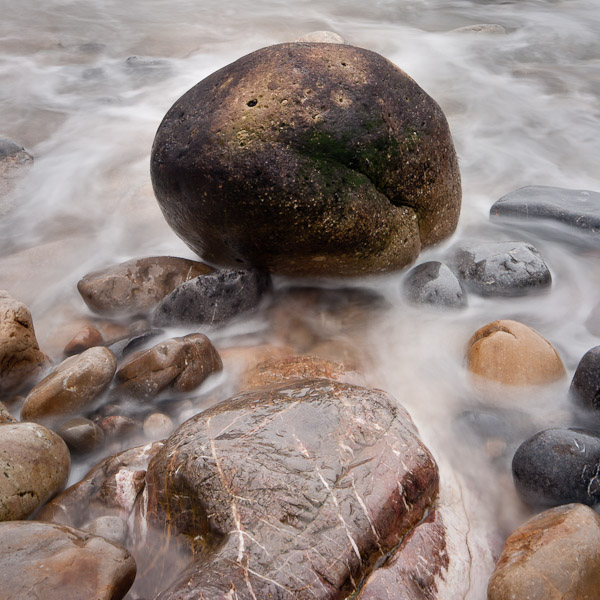 I’m sure I have been called a square in my time, but photographically it is always a format I have liked. I enjoyed and still continue to enjoy the square format in film, so when I came across this boulder at Brandy Cove and struggled to get a clear background to emphasise the boulder with my DSLR, I realised that cropping to a square would help the compositional balance as well as getting rid of the distracting background elements.

I tried to get my timing correct for making the image, as I didn’t want too much water flowing through the image, but needed some to fill in between the boulders. I’m not a great fan of really long exposureswith water as I like to have some detail in it, so it took a few goes to get the correct amount of water in the image. The shutter speed was dictated by the grey, overcast?weather and was about 1 1/2 seconds @ F16 at ISO 200. This gave a sense of motion but retained the detail. If it had been any slower I would have increased the ISO to try and get the exposure around one second.

Brandy Cove has some great rock patterns and boulders, which compared to other Gower beaches, is quite different. Others have a mixture of sand and pebbles or just sand. One of my other reasons to visit was to test out my new Tascam DR-680 multi track audio recorder. This is allowing me to start 4 channel surround sound recording for some future projects. Unfortunately I can’t post the surround sound recording on the blog, but a stereo mix version is posted below. 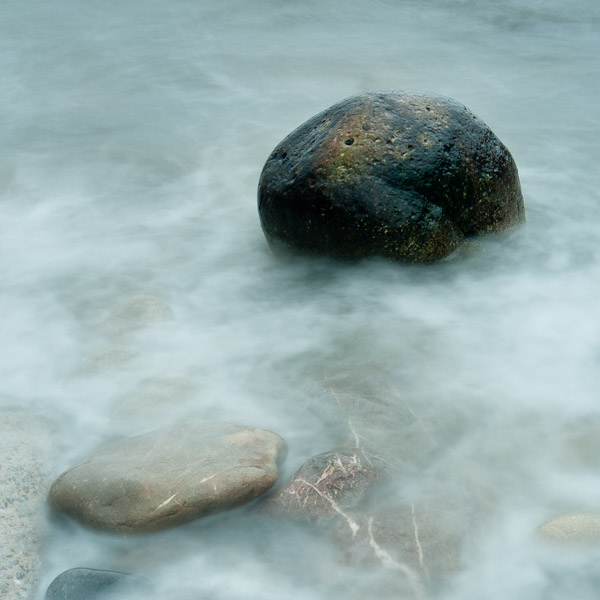 I tried a few more images of the boulder as the tide came in. The images have a different feel with the increased water levels, even though the exposure times had to be a bit longer as well. At the moment I prefer the first, but who knows over time the second image may grow on me.