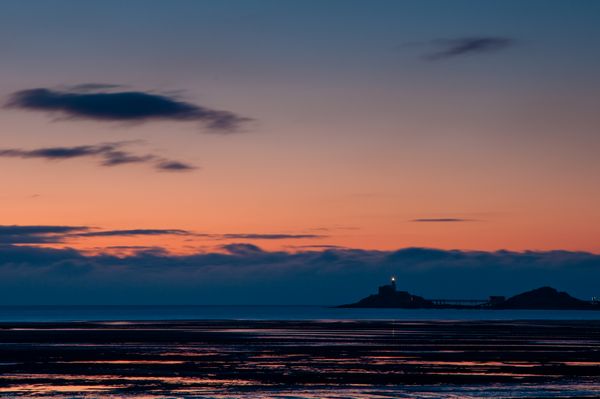 The last couple of days I have been heading out early to get to various locations, to see this happening over Swansea Bay. At last I managed to make some images of the bay before dawn and at sunrise. In winter the sun rises roughly in the middle of the bay when positioned at the Blackpill lido. The lido is a good place to position yourself as there is the option of using some of the small streams that enter the bay here as foreground interest.

The tide was out as you can see, which gives some interest in the foreground with the pools of water. They also help to break up the black area of sand. The headland is Mumbles Lighthouse which is actually trickier to photograph with the light showing than you would think. Even on some of my exposures of twenty seconds or more the light didn’t flash. It all came down to having to work out the timing of flashing of the light and triggering exposures around that. I was using daylight white balance as this gives you the cool blue shadows to contrast against the warm colours of the sky. If I had used auto white balance, I would have had to have adjusted the image in the RAW processing software as the camera would have compensated automatically for the light resulting in a plainer looking image. Plus I also prefer not to have to do too many adjustments on the computer.